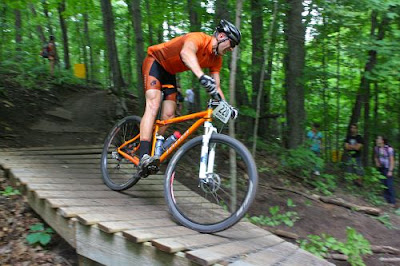 WORS Border Battle. Gene was brappin' and then went down hard. Saw him being taken out of the woods in an ambulance and then off to the hospital. He's a tough bastard and I'm sure by now he's heckling the other patients and staff. Here's to a fast recovery!
The course was great, the racing was fast and furious. Marko won. I was only 20 minutes behind him. My plan for overall domination is working perfectly. I'm almost there.
Stone and I were just 8 seconds apart at the finish. For me, that's a huge victory since I was planning on seeing him fly by me on the big climb in lap 2. He was running 34/17 and I had multiple choices. If I would have been running 34/17, by lap 3, I would have been doing beer hand-ups. I want to be one of the cool kids, but reality is a bitch.
Probably just a few more mtb races this year. CX is coming up fast. I need to start drinking more so I'm ready for the whiskey hand-ups. I gotta get better at those this year.