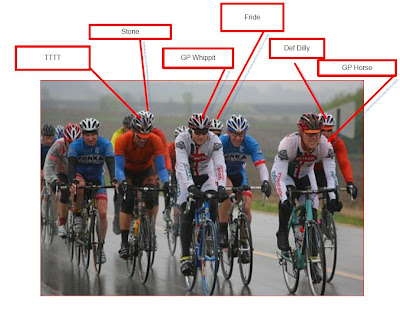 Saturday morning Fride, TTTT, Greenwood and I headed south throughstrong winds, heavy rain, and a 50 degree temperature to try our handat the first road race of the year. We all signed up for the 30+ 4/5race; the field ended up being pretty small, maybe 15 riders total?It was a nice way to dip my foot into the pool of RR again; having asmall field size gave me a sense of safety, but also well beingknowing that nobody would be able to sneak off the front w/out seeingit. It rained pretty much the entire time as we were fidgeting around,trying to figure out what to wear, all while trying to stay warm aswell. As 9am grew close, the rains slowed down to a heavy sprinkleand winds seemed to pick up a bit more. We were the last of the firstwave to start so we had even more time to fidget. Most notable at the start was that KW had 4 guys dressed in orangeready to do battle, with the largest team in the race, we figured weshould be able to do something. The first of two laps went off w/outany hitches. It was pretty mellow, and I was excited to be in goodposition the entire first lap, making sure I was in the right spot tostay out of the wind when we changed directions, and never foundmyself dangling off the back, or working too hard in the wind. Therewere two GP guys that seemed to be the ones to keep the eyes on; onewe'll call the GP horse as he was tall and had a build about him thatlooked like he could do some serious pulling; the other we'll call theGP whippet as he was lean, little, and looked like he could float ifgiven the chance. On the first lap the GP horse laid pretty low, butdid test the waters a couple of times, but never really disrupted thegroup too much. Heading in to the last climb to the start/finishline, the GP horse went to the front and held a steady pace to thetop. I patiently sat about 4th wheel and spun it out. We crested thetop and GP horse wanted to GO. Into the big ring, the GP horse wentand I jumped around to go too. The GP whippet hopped on my wheel andas soon as I caught the horse, the whippet went on the attack. I wentfor the whippet w/ the horse in tow. This went on pretty much untilthe first right hand turn to head south. A couple hundred yardsbefore the turn I was getting really gassed, and realized these guyswere workign me over until I broke--and I fell right into their trap.During this, the rest of the group had caught on. We rounded the turninto a crosswind and the GP horse went again, only this time I did nothave it, but TTTT did. Alone, TTTT bridged up to the horse and theywere gone. I sat at the front and recovered while seeking shelter from thecrosswinds from other riders. We kept a steady pace, as the timechecks kept coming at a steady 30 seconds to TTTT and the horse.Heading into the corner to head west, I knew we would be in a stongtailwind, and wanted to be sure to not miss anything. Sure enough, aguy attacked as we turned the corner and the game was back on. Ijumped hard and was able to real him in, w/ the whippet in tow. Weclicked into the 53x11 and absolutely flew for about 10 minutes.Fastest I've ever went on flat land, no doubt. Two others made itonto the speed train after a while and we kept it together until weheaded back into the cross wind. The legs were starting to feelheavy, and the 53x11 was not so easy anymore, the cross wind came andthe guy I was following drifted off the back. I tried to pass to jumponto the other 3, but I quickly realized I did not have what I thoughtI did. I drifted back for respite, but continued to drift back andwatch his wheel walk away from me. I looked back and saw no-one.Bummer. Left in no mans land it was time to test the mental mettle. It seemsa lot windier when you are alone. The remainder of the race waspretty slow, but I did not drift back as far as I thought I would.Head down, I studied the pavement closer than ever before, to thepoint where it became very anoying. The legs started feeling betteras I neared the final climb. I rode a steady pace up the final climb,and was happy to see TTTT standing there, wondering how it all shookout for him. No cramps. No crashes. Perfect. TTTT had a great race, and rode w/ the horse for a long time, buteventually the horse snuck away. The horse was in a league of hisown. Greenwood and Fride had a great race and finished just a littlebehind me. Overall a great day, all were happy to have toughed out the weatherand show the scene that KW never left!