Came to the race thinking I would start a bit slower than normal ala WW to try and not go into the dark places so early. Then BBBB comes up and says there is no real climbing on the course, so I'm changed my thinking back to holeshot mode. Although with the new groups of fast guys that win each week, holeshots at Buck haven't come easy. 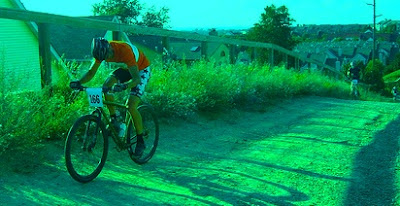 After lap one, WW, Stone and ToMac are ahead of me and I figured I was off there radar for the rest of the race. Sometime after lap two I start seeing those guys and start feeling pretty good, so I get going and catch up to ToMac. He flew through the singletrack at the top of the course and we pop out on the top and pass Stone and Larid surfer muscle LCR dude. From that point on, I was going as hard as possible and feeling it. Duked out the final lap with a guy I didn't know. Was hoping to stay with him on the switch backs and had visions of sprinting and beating him. But, his geared machine pulled away from me at the end and I didn't have anything to chase with. 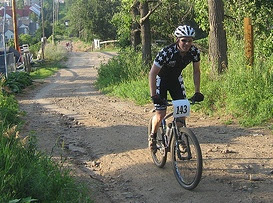 Owen had a great race as well. He came in dead last and wasn't upset about it at all. I love that. Smiled when we cheered and headed straight for the candy at the end. Per again threw down a holeshot and a big W. In the longer kids race, Campell rode like the little pro he is, mixing style with skills and making everyone else look like children...oh, I guess they are...well, you know what I mean. Nice work boys!

Photo's curtesy of PD and Dirtgirl. Hope you don't mind I poached a few for the blog.