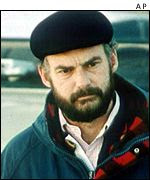 
Exxon Mobil, the giant oil corporation appearing before the Supreme Court yesterday, had earned a profit of nearly $40 billion in 2006, the largest ever reported by a U.S. company -- but that's not what bothered Roberts. What bothered the chief justice was that Exxon was being ordered to pay $2.5 billion -- roughly three weeks' worth of profits -- for destroying a long swath of the Alaska coastline in the largest oil spill in American history.
"So what can a corporation do to protect itself against punitive-damages awards such as this?" Roberts asked in court.
The lawyer arguing for the Alaska fishermen affected by the spill, Jeffrey Fisher, had an idea. "Well," he said, "it can hire fit and competent people."
The rare sound of laughter rippled through the august chamber. The chief justice did not look amused.
Perhaps, though, his consternation was misplaced. Everybody knows the wheels of justice turn slowly, but in the case of the 1989 Exxon Valdez spill, things have dragged on so long that Lady Justice's blindness could reasonably be attributed to cataracts.
Nineteen years after the Valdez ran aground in Prince William Sound and spilled 11 million gallons of oil, the 32,000 plaintiffs -- mostly fishermen, cannery workers and Native Alaskans -- have received no punitive damages from Exxon.
A jury awarded them $5 billion in punitive damages -- a record level, for a record disaster -- and an appeals court cut that in half. Now, the Supreme Court seems inclined to deal another insult to the victims (as many as a fifth of whom have already died) by cutting the award further.
Arguing for the Alaskans, Fisher, a tall and lanky Stanford professor with unruly gray hair, pointed out to the justices that the spill "destroyed an entire regional economy." Yet Exxon fired only one person, Capt. Joseph Hazelwood, who even the oil company admitted was drunk at the time of the accident, while executives received bonuses and pay raises. "What you have today are 32,000 plaintiffs standing before this court, each of whom have received only $15,000 for having their lives and livelihood destroyed and haven't received a dime of emotional-distress damages," Fisher argued.
Several justices, however, seemed more concerned about the emotional distress of the Exxon executives. "I assume the test is the person has to be high enough that it justifies holding the entire corporation" responsible," Antonin Scalia said, "and I doubt whether a captain is high enough."
Justice Anthony Kennedy, wagging his finger at Fisher as he challenged the lawyer's argument, charged that "the corporation's responsibility or complicity or culpability is simply not relevant under your theory of the case."
Roberts seemed the most agitated as he argued that Exxon wasn't responsible for the captain's unauthorized drunkenness. "I don't see what more a corporation can do," he said. "What more can the corporation do other than say 'Here is our policies' and try to implement them?"

Then stop buying gas dude. I see people riding their brakes uphill and they complain about the price of gas. WTF? Supply and demand retards. Ride your bikes not your brakes.