Thank you Sir, may I have another?

If you were in Fruita in 2006, you'll remember Doom as the guy writing tickets to patrons of the Hot Tomato for a number of sketchy reasons and dancing with a very large dust broom in his socks. 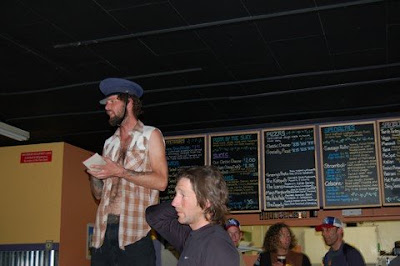 He's also pretty handy with a sharpie and wrote something to effect that "I love Sailors" on my arm as I, amid many many distractions, proceeded to dominate the Arm Wrestling Championships of the night against a well known all around bad ass mountain girl. Since then, I've come to know Doom a bit better and found not just a super nice guy, but a kindred Kracer for sure. He's the real deal when it comes to riding a bike and living the life. Here's the low down.

From the Durango Telegraph:

If there’s one thing Steve Fassbinder detests (even more than Lycra, which he begrudgingly admits to wearing on occasion) it’s routine.

“I hate training,” admits the lanky mountain biker, 34, better known as “Doom” to his Thursday night singlespeed ride cohorts. “It takes all the fun out of it, so I don’t do it.”

So, just what does the three-time World 24-Hour Solo Champ and soon-to-be inductee into the 24-Hour Solo Mountain Bike Racer Hall of Fame do to stay in tip-top shape?

“Lately, it’s consisted of living fast and drinking lots. I think it pays off.”

Of course, for this recent Mancos transplant from Durango, “living fast” is all relative. More than likely, he’s taking the literal sense of the word, as in self-inflicted, 150-mile daylong romps through the San Juan Mountains that mere mortals would consider suicidal. These are “rides” that make the Death Ride look like a church picnic.

“I just got done with a race last weekend that went from Bear Creek, outside Dolores, up toward Dunton, over Lizard Head and back over Bolam Pass to Blackhawk and the Colorado Trail,” he said. And as a side note, he not only rode the course, but won, in 14 hours, all without the benefit of shifters or derailers.

See, Doom – actually a congenial fellow who earned his name as his alter-ego, Dr. Doom, at Burning Man (“It just stuck”) – is among the growing cult of singlespeeders, riders who eschew multiple chain rings for the simplicity of gear-free mobility. “I tried one about seven years ago, sold all my geared bikes and never looked back,” he said. “It was just so much smoother, lighter and quieter.”

Nevertheless, the former bike messenger, who cut his teeth on a track bike (read: no brakes) on the mean streets of Seattle and Denver, has won several 24-hour solo races with gears and without. He got his first taste of 24-hour solo riding mostly by chance more than a decade ago. During a stint living in Portland, he decided to enter a local 100-miler, the deceptively named Cascade Cream Puff. “I read an article about it and figured it sounded like what I do anyway, just not in a race,” he said.

As fate would have it, he readily delivered a 9-hour finish time. But the real twist came when, as a prize, he won free entry (a $300 value) in the upcoming 24-hour Donner Pass solo race in California (which, incidentally, he won.) “I’d never done any racing before. I was hooked.”

Consider that at the time, circa 1997, 100-milers were deemed extreme and the even-rarer 24-hour race, still in its infancy, downright insane. “There were only five or six solo races in the country back then,” he said.

Since then, numerous 24-hour races have popped up, including the infamous 24 Hours of Moab, which Doom still counts as one of the tougher courses around for its extreme temperature differential and sandy, rugged terrain. And, of course, in today’s ever personal-besting world, the ante has been continually rising with ridiculously harder races, such as the 150-mile Kokopelli Race, from Fruita to Moab; the Iditasport Extreme, a 320-mile mountain bike race across Alaska’s frozen tundra; and the mother of all, the 2,500-miler Great Divide Race, which follows the Continental Divide from Canada to Mexico.

As for Doom, who hails from a modest, rural upbringing in Westcliffe, Colo., he’s done them all. And, with the exception of the Great Divide, which he was forced to give up because of a nagging IT band, he has done quite well. Over the last decade, he has ridden in and placed among the top 10 at the World Championships five times – most on a singlespeed and before there was even a singlespeed category. And in addition to local notoriety, as evidenced by the one-word name recognition and a starring role in last fall’s locally produced bike polo documentary “Mallethead,” he recently learned he would be bestowed a spot on the World Champ “Legends” podium, alongside such extreme 24-hour icons as John Stamstad and Ed Hunt.

Despite this, Doom prefers life out of the enduro world limelight, as evidenced by the fact that he is more plastered in ink than sponsorship logos. “I’ve never been paid to race,” he said, although he does admit to a sweet hook-up with Golden-based Spot cycles as well as the Durango Cyclery. In fact, for the last few years, Doom has all but given up on the glitz of the organized racing circuit in favor of low-key, loosely organized affairs, such as Durango’s underground “Day of the Dead” singlespeed race. “I haven’t done a 24-hour solo race in three or four years, it’s become too big of a show or production. The first Worlds I did, there were 34 racers, now it sells out at 300,” he said. “I’ve been doing more unsanctioned, unofficial, adventure type races where you’re on your own the whole time, trying to find your way. It’s the sort of thing where if you win, you know it, because you were there first.”

In addition, he’s also been branching out in other directions and recently has devoted most of his time to the joys of homeownership. A carpenter by trade, he also launched his own cycling clothing line, “Doom,” which he sells at the Cyclery. “My clothing definitely has a Western flair,” he said, with a slightly sarcastic nod to his small-town Colorado roots.

Nevertheless, that doesn’t mean Doom is ready to hang up the racing jersey for good. In fact, this week he is coming out of retirement to race in Canmore, Alberta, in the 10th annual 24-Hour Solo World Championships, put on by 24 Hours of Adrenaline. For Doom, it’s more of a reunion than anything else. “I really want to go to see some old friends,” he said. “It’s been 10 years since I first raced, it’s full circle.”

Of that first Worlds race, it’s a wonder Doom even continued his career at all. “It rained and snowed on us the whole time,” he recalled. “It was the worst conditions to ride your mountain bike in, even for five minutes.” Fortunately, Mother Nature finally intervened when a treed grizzly closed the last lap of the course, a move that Doom heartily accepted.

As for the official “legend” status that awaits in Canmore, Doom said he is honored but remains vague as to the secret of his enduring success. “It’s not about being the fastest person, but about pace,” he sad. “It’s just riding your own race and not thinking about what everyone else is doing.” However, a little basic psychology coupled with a high pain threshold doesn’t hurt either. “You’ve got to have a positive attitude. As soon as you start to think about how much your body hurts, it’s all over.” •

This is a helpful suggestion.. 2011 scholarships