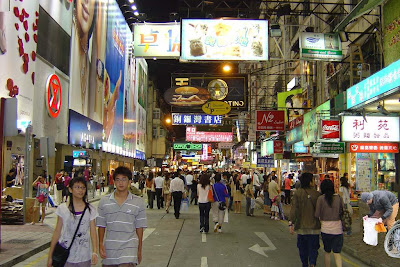 After the great wall stroll, Otree found himself roaming the streets of Hong Kong, where upon, he stumbled on a nice set of 26" wheels in the trash. Sick of walking and all the 29er talk, he decided he would try his hand at panhandling to raise funds for a used Giant frame he saw at the shop down the way. With wheels and a frame, Steve would be well on his way to another 26" single speed. With visions of riding a bike again and white trash bag in hand, Solotree got to work. Known for their generosity, the good people walking the Huangpu District of Hong Kong, started to fill Otree's trash bag with all manner of goods including loaves of bread, family pictures, matches, paper dragons, fireworks, shoe laces and spare change. Filled with a renewed sense of purpose, a source for fire and a full belly, with bag still in hand, Otree started dancing while he begged. This seemed to confuse and disturb the locals, so he stopped dancing, bowed his head and kept quiet. Within minutes after this picture was taken*, Otree was gone from this location. No word on his location at the present time or on the build status of his new/used Giant single speed.
*Photo taken by the same Red Army Soldier who spied Otree on the Great Wall. This soldier's current and only assignment is to track and document the whereabouts of this strange and intriguing American.

Does PoorTree have access to Wisco brats and kraut? did he stuff his Chrome bag full of these essentials before heading to land of Giant?

You could have stopped with strange......