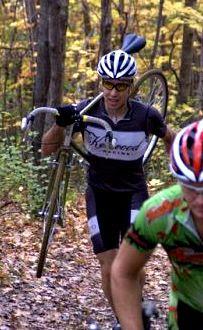 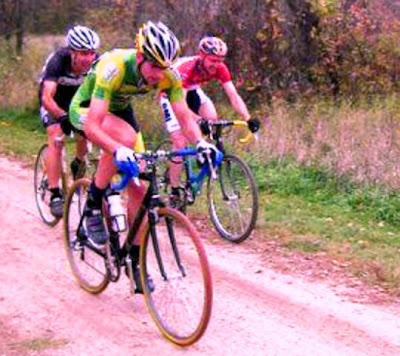 I opted to race at Lake Rebecca after the river bottoms enduro ride was rained out, and spent Friday evening putting the 'cross goods back on the Goodrich - Tufo sewups, single ring in the front, and made sure the Paul's cantis were dialed.

Sunday proved to be drier and warmer than expected; I was hoping for some gnarly 'cross weather! I arrived at the course about 15 minutes before the B race went off, so I jumped on the bike and rode a practice lap - my first 'cross ride of the season, but everything fell into place. After watching the B race go off (with BBBB and Ezra representing), I rode back and registered.

It wasn't long before I was riding a final practice lap before lining up. I found a friend to do bottle handups - the temperature and humidity was brutal! The race started fast and furious with an uphill start on the gravel road, followed by a tight s-curve and a descent to the wooded singletrack. The singletrack was wet but tacky. A single log was easily bunnyhopped before reaching the barrier at the foot of a steep runup. A few guys rode up but they weren't going any faster than the runners. The remaining woods section was fun and swoopy, as long as you stayed on the smooth dirt. Then it opened up to more swoopy fast rollercoaster stuff, with some greasy corners to make things interesting. Then on to a short stretch of tarmac, another barrier with a soggy hill that sucked the life out of you whether you rode it or ran it. That was followed by a flat gravel road which eventually descended to the start/finish area.

I had a decent start and managed not to tangle with anyone. The first lap was fun and fast, but by lap 3 I was wondering what the hell I'd gotten myself into. The hills were killing me! I was in a pack with Scottie Rob for a few laps but he eventually pulled away looking strong. After a few more laps I began to enjoy myself again and decided I'd finish after all. The Goodrich felt great and worked perfectly. I was changing places with Dale Sedgewick for much of the race. Fast Eddy passed like a rocket with a few laps to go (how does he do that?). I got lapped halfway through the 2nd to the last lap by Dewey Dickey (at about the same time that I passed Scottie Rob, who had cracked badly), then a little while later by Aric Hareland. I was happy to do one less lap. I left afterwards without seeing the results, but I think I was mid-pack. All in all a good day, but I'm looking forward to having TTTT and WW in the pack next week.

Great recap Tommy. Thanks for sending it...after I asked for it!!!